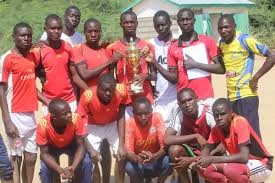 The school was established in 1969 as a day school and was by then known as Kitale Day Secondary school. Later when the school was burnt down form 3 and 4 students moved to St.Joseph Teachers Training College resulting in the birth of the current St. Joseph High School-Kitale and transfer of the college to Mosoriot.

Later it was rebuilt after burning down and later grew to a high school in the old system of education with the introduction of A-Level art classes in 1987.Partial boarding was also introduced during the same year.

The school grew to become a three stream school under the Catholic Diocese of Kitale in 2000 and changed its name to St.Anthony’s High School-Kitale. The school expanded to a four stream school with a teaching staff of 60 and student population of 1170 currently.

It is regarded as one of the best schools in Kenya.